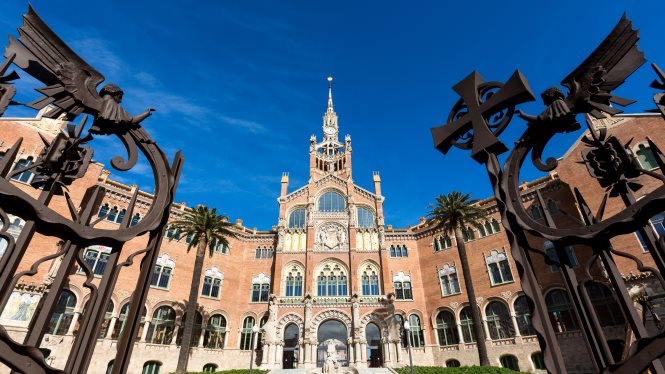 Tourism and Heritage. Tourism and city. A journey through history and culture

TRADITIONS AND TYPICAL COOKING. A ROUTE FOR PEOPLES AND CITIES WITH AN IMPRESSIVE MONUMENTAL HERITAGE.

The tourism of city is a tendency that every day is more present in the preferences of the travelers. The cities have already become a serious competitor of the sun and beach vacation product and it is a solid alternative to deseasonalize.
For example, London already receives more than 18 million international tourists, while Paris reaches 15 million, Barcelona, more than eight million, and Madrid, nearly four million.

In Spain, small medieval villages, old quarters steeped in history and beautiful rural areas close to large cities like Madrid, Barcelona, Valencia, Seville and Bilbao.  These are perfect places to discover interesting traditions, popular festivities and the most typical cuisine.

Here are some of Spain’s charming towns. There are lots to discover all over the country. Inland you can find medieval villages and towns which still preserve part of their Roman or Moorish past. Close to Madrid you can visit small rural cities in the mountains. In Andalusia and Extremadura you will come across many whitewashed villages. In Catalonia, the Region of Valencia and the Region of Murcia there are fishing villages, and towns in the fertile agricultural regions. In the regions of Aragon, Castile-La Mancha, Castile-León, La Rioja and Navarre you can find villages where time seems to have stood still. In the north, in Galicia, Asturias, Cantabria and the Basque Country, rural life and fishing villages are the main things you will see. And, of course, the Balearic and Canary Islands also have small charming villages that still keep their local traditions

These easy-going towns to invite you to take a rest from the breakneck speed of your daily life.  You’ll be able to do all that in these towns of under 50,000 inhabitants, which meet a series of requirements for recognition of their outstanding quality of life. Morella, in the Region of Valencia; Balmaseda, Lekeito and Mungia, in the Basque Country; and Rubielos de Mora, in Aragon. In short, places with charm which revere tradition, a taste for the home-made and home-grown, and the natural passage of time.

Catalonia has a rich history, beautiful and varied landscapes and amazing local food and wine. There are also a number of gorgeous, medieval villages in Catalonia that are worth the drive out of the city. Begur, Rupit, Pals and Peratallada, for example, are a places with charm which revere tradition, a taste for the home-made, and the natural passage of time.

The principles that these towns encapsulate include respect for the environment and the promotion of natural foods and hand-crafted products.

CALELLA PALAFRUGELL.- A cluster of chocolate-box whitewashed houses bathed in glorious sunshine along a rocky shoreline, Calella de Palafrugell is, no doubt, one of Catalonia’s. Calella has nevertheless preserved its authentic charm, thanks to the relaxed peace of life, characterful winding streets, and handsome buildings covered in vibrantly coloured bougainvillea.

Its architecture is an awe-inspiring mix of old fishermen’s cottages and elegant villas in dazzling whites and delicate pastels. Fashionable boutiques and animated waterside bars add to the town’s irresistible allure, and so does the surrounding area, home to gorgeous natural parks, idyllic sandy coves, and some of the most bewitching botanical gardens in the Mediterranean – Jardins de Cap Roig.

CASTELLAR DE N’HUG.- Is a picturesque village in the northern end of Barcelona province, in the Berguedà region.

In a fabulous natural setting, the village includes some lovely Catalan Romanesque architecture. Castellar de N’Hug has well-preserved medieval cobbled streets with beautiful examples of rural vernacular architecture, characterised by traditional stone houses. The Middle Ages was a time of great artistic splendour and prosperity for the village, as can be seen in the many Romanesque structures throughout the region. The church of Santa María de N’Hug, in the village centre, was built in the 11th century, with later Neo-Classical additions.

Castellar de N’Hug also has interesting museums to offer the visitor. In the spot known as Clot del Moro there is a Cement Museum, the Museum of the Ashland factory of Castellar de N’Hug, a striking example of industrial Art Nouveau which was the first cement factory in Catalonia

PALS.- A few kilometres from the Mediterranean Sea, right on the Costa Brava, lie the medieval streets of Pals. The county of Baix Empordà in the province of Girona has in this town a lovely old quarter, declared a Historic Artistic Site. In the Gothic quarter of Pals, pretty cobbled streets flanked by aristocratic houses await you. Pals beach completes the visit to the walled town. At any of these points, you can try the area’s cuisine, based on products from both the sea and of the mountains.

PERATALLADA.- Fairytale-like houses carved in stone, chic restaurants, old-fashioned little squares, and stunning medieval remains make Peratallada a gem of a place in Baix Emporada county of Catalonia. Apparently a small, isolated hamlet, Peratallada complements list of historic–artistic monuments ever since 1975. Along its narrow streets you’ll find an exquisite selection of boutique hotels, al fresco dining venues, and art galleries, all shrouded in a charming rustic feel. Main attractions include the ancient Plaça de les Voltes, the 13th century Romanesque church, the town walls, and the lovely buildings and towers that once made up the castle of Peratallada.

RUPIT.- Perched on a small rocky hill, 882 m above the sea level, Rupit is one of the prettiest Catalan villages. With its postcard-perfect setting, traffic-free limestone streets, and rustic houses that date back to the 16th and 17th centuries, this tucked away gem is a reward for anyone in search of Catalan splendours.

Stroll along the medieval streets, try some local cheeses and sausages in one of the idiosyncratic shops dotted along the way, explore the impressive remains of Rupic Castle and the many beautiful churches in the zone.It’s a place that transports any visitors to a distant era in time. It’s a small town that attracts many tourists and visitors because of its attractiveness.  It’s also worth doing the short trail to the Salto de Sallent, a nice and tall waterfall in the area.

VALL de BOI.– Located in the region of Alta Ribagorza, Lerida, the Boí valley is located in the westernmost part of the Catalan Pyrenees.

Taüll is at 1,482 metres above sea level. There are two parts to the village, located around the churches of Santa María and Sant Climent, whose mural paintings are some of the most important exponents of Catalonian Romanesque art. Especially outstanding is the Pantocrator, or Majestic Christ.

The villages’ churches are first mentioned in the 12th century. Originally the idea was to establish a monastic centre here. Both these Romanesque churches, with their spectacular stone and slate bell towers, received the UNESCO World Heritage designation in 2000.

A visit to the Aigüestortes National Park is also highly recommended. It is very close to the village.

Inside the Boí valley, in the region of Alto Pirineo, Lerida, we find the small town of Erill la Vall. The church of Santa Eulàlia is included in the collection of Romanesque temples from this valley that was declared a World Heritage by UNESCO.

The relevant role played by the Boí valley in the Middle Ages left an important architectural legacy, one of the most remarkable in Catalonia. The church of Santa Eulàlia, in Erill la Vall, dates from the 12th century, the same as the rest of the neighbouring temples, all of them built in the Lombard-Romanesque style. The building, fully remodelled, has one nave with a central apse, and an attached, slender bell tower that is six storeys high. Inside we can see some remarkable mural paintings, as well as the sculpture grouping that depicts the Descent from the Cross, presently kept at the Catalonia National Museum of Art (MNAC) and Vic Episcopal Museum (MEV).

Tourism has turned in to a daily element in our lives. In the last 25 years, the number of people who travel around the world has increased majorly.

Within this growth, Barcelona has positioned itself as one of the number one cities visited across the world. Excursions around Barcelona and Catalonia, round trips through Spain and Europe, have stated the company as reference in the tourism by coach sector.

With the general expansion of tourism and the reinforcement of Barcelona as a world-wide destination, Avant Grup has achieved the consolidation of its position as a leader in Barcelona and Catalonia as coach transport for the tourism sector.

Thousands of passengers travel around Barcelona, Madrid, Malaga, Seville and Lisbon, to which we have to add all the other European cities where our coaches reach out to, following programmes set by tourism operators. A vast majority of international Tour Operators trust Avant Grup, coach company in Barcelona and Madrid for their transfers, visits and excursion programmes.

Our challenge is to make transfers from the airport to a hotel, visits to different cities, or excursions around different capital cities, a memorable experience.