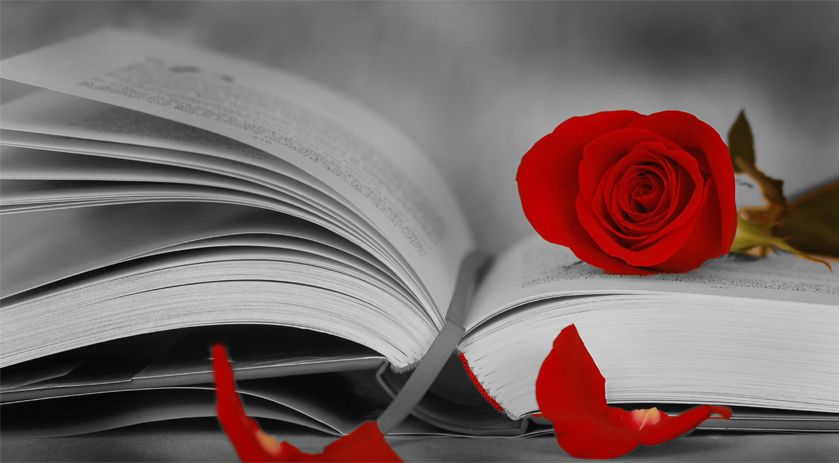 Sant Jordi is the festival of gestures in the form of books and roses for the ones we love most.

We know that the tradition of giving roses to loved ones goes back a long way. Sant Jordi’s link to the world of chivalry and courtly love could have been the basis of this tradition. We also know that in 15th century Barcelona, they held the Fira dels Enamorats, the lovers’ fair, and rose vendors set up around the Palau de la Generalitat. At the same time, it was customary to give a rose to the women who attended Mass in the chapel of Sant Jordi in the Palau. Finally, there are those who say the custom of giving roses has Roman roots, particularly stemming from celebrations in honour of the goddess Flora, which were later Christianised.

This is a day when you don’t need to go to a bookshop to see books. There are thousands all around you, on every corner, every street and in every square. The main artery is the Rambla, packed with stalls and authors signing their latest works, with bookshops from every neighbourhood taking the streets and flooding Barcelona with their best literary offerings. Florists, meanwhile, sketch Barcelona in all the colours of spring, while lovers give each other roses in a gesture of love writ large. Confectioners make chocolate knights and dragons, and bakers bake delicious bread with cheese and sobrassada sausage in the colours of the senyera, the Catalan flag. Everyone makes their gesture so you can make yours.

These days, flower shops, street corners, avenues, roads, and squares all become places to sell and distribute the thousands and thousands of roses that are given away to loved ones, as tradition dictates, but also to friends, mothers, fathers, colleagues, and clients. Because this flower has exceeded its original meaning of love, and has also become a gift of friendship and courtesy. As you can see, the rose has become the star of the festival, so much so that domestic production is no longer enough to satisfy the demand, and flowers must be imported from far off parts of the world.

A popular festival is, by definition, a street festival. If that is always the case, how much more so on 23 April, when thousands and thousands of people take to the streets for a stroll and to enjoy one of the most intense, special and beautiful days of the year. Check out all the activities.

Sant Jordi – Day of the Book and the Rose

Many people go to festive markets to buy books and flowers, particularly roses, to give to their loved ones on St George’s Day. These markets are held in the center of towns and villages. They often include other cultural and literary events, such as book signings and readings of classical Spanish or Catalonian literature.

April 23 is not a public holiday in the autonomous community of Catalonia. Many businesses, stores and other organizations are open as usual and public transport services operate to their normal schedule. However, special flower and book markets are held in the center of many cities, towns and villages. Is been told in the legend that the most beloved princess of the town, was given to a dragon which frightened them, because there were no sheep enough to feed him. Saint George, valiant knight, was in the vicinity of the village and after hearing about the news, unable to allow that, faced the beast. He struck him with a sword and wounded the dragon fatally. Blood gushed from the wound that, at the feet of the knight, became a bright puddle where precious red roses bloomed.

Here was where the tradition of giving, every April 23, the day of saint knighted, a red rose to every beloved woman, was born. To this was added, years later, the present of a book to men, in commemoration of the celebration of World Book Day in honour of the death of two major milestones of literary history, William Shakespeare and Miguel de Cervantes, dead on April 23, also according to the legend.

Thanks to its strong literary tradition and commitment to literature, Barcelona was recently included in UNESCO’s Creative Cities Network as a City of Literature. The title implies world recognition of Barcelona’s literary sector and literature. Generations of parents and children have heard about the legendary knight and the dragon killing, but if there is a land that traditionally has taken the reins of the festival, that has been Catalonia. In our lands, each 23 of this month, although not listed as a national holiday, the crowd is organized to go out and expose, on a claim way somehow, liveliness and brilliance of a celebration that combines tradition, culture and gastronomy typical. Maximum exponent of a unique day, the city of Barcelona assumes the primary role of the historical date and includes in its most emblematic streets –Las Ramblas and surroundings-, hundreds of stands where buying roses and stalls where not only books but also their authors, are the main focus of attention of visitors and of the people of this small country. Activities related to cultural leisure, such as the mythical reading of the legend of Saint George, concerts, literary events in libraries and a long list of events, come together in the Catalan calendar every April 23.

And while the popularity of this feast is established in our community on the Mediterranean, there are many countries that pay honour to Saint George and which have in this saint, its patron. Within the Spanish geography, communities such as Aragon, Caceres or Santurce (Vizcaya) celebrate, in a different way of Catalan people (also adopted by the Balearic Islands and Valencia), the sanctification of this knight, who carried the recovery of these lands to the Christians against Muslims in times of the reconquest thousand years ago. But if there is a country that pays tribute to its patron and which has the greatest international impact of this celebration, this is England. Most important festival, April 23 became the day of national pride for the English. An essential date in order to imbibe good English culture, attending to any of the sports tournaments of football, cricket or rugby organized as part of the cultural celebrations of one of the oldest traditions of England, or coming near to English food festivals where you can taste traditional sweets, cheeses and beers; and attend to theatrical performances coincide with the celebrations for the anniversary of the death of Shakespeare, whom the English people also pays tribute.

Who was going to tell to this gentleman, Roman military and Greek and Turkish origin, he would end up becoming a hero of a legend, despite actually being a martyr who was beheaded for not renege on his strong Christian faith.

At the moment, although the true story treats him so, we will continue living this feast with the cultural connotation that after years and years, has settled in our lands and has taken a toll on the lives of people in each of these regions that celebrate, as well as they know, the feast; in a festive atmosphere where the cultural values and feelings of a nation to defend a lifestyle and kindness and sociability of people, come together.

Avant Grup with the culture and the traditions

Avant Grup, transport service supplier with different cultural and sporting entities of our country, echoes the traditions and culture to coincide with a Saint George’s Day where the protagonists are the book and the rose….

Avant Grup, offers a wide range of transport services for congresses, conventions and events, which cover all mobility needs, whether for leisure, business tourism or for the thousands of cruise passengers arriving in the ports of the Barcelona, Palamos or Tarragona every season. We always look for the most efficient solution and adjusted to any need.

All our coaches are equipped with the most advanced safety and comfort systems, which allows in safe and efficient driving.