CULINARY TOURISM.- A taste of gastronomy

Cuisine is geography, history and culture.

To taste and enjoy a country’s culinary products is to explore all its traditions at once.

In recent years the cuisine has become indispensable to know the culture and way of life of a territory. Gastronomy represents an opportunity to boost and diversify tourism, promotes local economic development, involves various professional sectors (producers, chefs, markets …) and incorporates new uses to the primary sector.  This gastronomy’s role in the choice of destination and tourism consumption has resulted the growth of a cuisine based on quility indigenous products and in consolidating its own market for gastronomic tourism.

Culinary tourism is the focus on food as an attraction for exploration and a destination for tourism. Although food has always been a part of hospitality services for tourists, it was not emphasized by the tourism industry until the late 1990s. It now includes a variety of formats and products – culinary trails, cooking classes, restaurants, farm weekends, cookbooks, food guides, and new or adapted recipes, dishes, and even ingredients.

Discovering a country’s food and drink; browsing its market stalls; purchasing, tasting and chatting to culinary experts, exploring wine routes… all this is food and wine tourism.

Gastronomy can bring great leverage to a country’s economy. France learnt this some time ago, and Italy applies it with brilliant results. The real direct and indirect impact of the restaurant business goes much further than one might originally have thought. Eating as a leisure activity.

The Mediterranean coast of Spain is a popular touristic destination for those looking for beach holidays and high-quality food and wine. You’ve probably heard about the benefits of Spanish Mediterranean diet that has become so popular in the recent years thanks to magazine and newspaper articles and trendy diet books. It contains a great variety of seasonal fruits and vegetables, meat and cheese, legumes, fish and sea products. Almost every meal is accompanied by a glass of delicious wine.

To taste authentic Mediterranean food the Spanish territory could boast of having various three-star restaurants, sharing the third place with Italy (after Germany and France) in the list of countries with the largest number of three-star restaurants in Europe. El Celler de Can Roca (Girona), Akelarre and Arzak (San Sebastian), Martin Berasategui and Carme Ruscalleda’s Sant Pau are among the best Spanish restaurants that have received three stars from Michelin guide experts. There are also 171 restaurants with at least one Michelin star.

At the moment Catalonia has the privilege of being home tor some of the world’s top chefs. Recently, the media have featured the likes of Ferran Adrià on the frontpage of The New York Times and Le Monde. Fermí Puig, Carles Gaig, Carme Ruscalleda and Sergi Arola, to mention but a few, enjoy huge media attention for their professional careers. This recognition all comes thanks to the solid roots of Catalan cuisine, a style of cooking that comes from tradition and a willingness to experiment with vanguard techniques, and this is what makes it stand out as one of the best sorts of cooking in Europe.

Catalonia boasts a host of gastronomic activities. Is a country with traditions going back more than a thousand years, a land with its own culture and language that enjoys a mild Mediterranean climate and an unrivalled natural diversity. It is a country built on a wealth of contrasts that make the customs, traditions and people of Catalonia absolutely unique.

To enter Catalan territory is to immerse oneself in an unimaginable sea of possibilities: to discover charming villages; to commune with nature; to discover the country’s architectural heritage, music and deeply rooted traditions; to do business; or, simply, to relax by the sea.

The features that differentiate Catalonia, making our country stand out from the rest, are also evident in the region’s culinary culture that have sea and mountain; tradition and innovation; and a wealth of quality lo 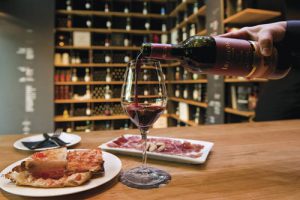 Another good thing about wine tourism in Spain is that it can easily be combined with the excellent gastronomy of Spain. Spanish gastronomy is considered one of the best in the world for its quality and variety. In fact, Spain is home to the world’s best restaurant, El Celler de Can Roca in Girona. Each region has its own local cuisine whose dishes are best understood when paired with the wines from their respective regions.

A sure way to enjoy the local food with its wine is to treat yourself to lunch at a winery. Many wineries and caves already offer guided tours and associated activities. The only difficulty, if time is limited, will be to choose the route amongst all the different possibilities.