THE SUMMER’S FESTIVAL LEADS A WIDE AND VARIOUS MUSICAL OFFER

Catalonia is getting ready for a vibrant summer of music festivals, attracting all types of music lovers. In Barcelona and the Costa Brava, both mass and boutique festivals are held. Mass festivals are the big, open air. Boutique festivals, on the other hand, focus not only on the music, but also on offering high-quality gastronomy and a classier atmosphere that targets a public with a higher income. In these cases, the venue is sometimes as important as the artists, which may be a castle on the Costa Brava or a cosy stage near the sea.

Specifically, the region of Catalonia has its own incredible festivals held throughout the summer. Is this time of the year when we want to be outdoors and enjoy the landscape.  There are so many more activities to do in Catalonia.
Catalonia are lucky because it is full of art and culture all year around but in summer some of the most famous musical festivals and theatre performances take place.

In Barcelona highlights a summer festival in the city

El Grec: the festival takes its name from the greek amphitheatre well some of the performances take place. It is a music, dance and arts festival. There different kinds of performances all around the city in diverse locations.

The location is amazing, watch the greek amphitheatre where some of the performances take place.

In the area of the Costa Brava is where the best summer festivals stand out.

The Costa Brava is very famous for its incredible beaches, but the area is much more than this and it is one of the centres of arts and culture. Costa Brava Girona Festivals has become a must go with its variety of music concerts, dance performances, opera, cinema, circus, magic, theatre, art etc…

In this edition, this festival brings together figures from international music such as Charlotte Gainsbourg, singer and composer Paul Anka, the Pink Martini line-up or Cirque Éloize to highlight some of the protagonists. This edition of 2019 also dedicates a memory to the great soprano Montserrat Caballé who, together with Carmen Mateu (Festival Manager), made us dream that it was possible that Perelada could have a prestigious international music festival. In this sense, an exhibition of photographs of some of the great moments that Montserrat Caballé could give to the history of this festival has been organized in parallel.

There are innumerable cultural and musical events that take place during the summer throughout the Catalan geography, where we can also highlight the Porta Ferrada Festival in Sant Feliu de Guíxols, the Garden Festival of Pedralbes in Barcelona or the Roca Foradada Festival in Torredembarra

Another outstanding proposal is the CAP ROIG Festival in Calella de Palafrugell, as its varied and high-quality musical offerings are suitable for a wide spectrum of audiences and have been held since mid-July to mid-August. The Cap Roig Festival is a dance and music festival that has been held in the grounds of the Gardens of Cap Roig since 2001, which has a capacity for 2.118 spectators in an emblematic space and outdoors. All types of national and international artists participate in this event. The Cap Roig Festival, perhaps, can be considered the most important summer event on the Costa Brava. For this edition, Sting, Maluma, Diana Krall, Jamie Cullum, Liam Gallagher, Ainhoa ​​Arteta, Luis Fonsi and David Bisbal are some of the artists who will participate this season. The performances are concentrated between July 12 and August 21 and also include a concert by the singer Sílvia Perez Cruz

The Porta Ferrada is a Catalan, Mediterranean and European festival.

It was born in Sant Feliu de Guíxols in 1958. It is the oldest music festival in Catalonia. It is unique in the Costa Brava because of its proposals, open to all artistic disciplines. National and international well-known and stand-out artists take part in its events.The festival offers the best cultural proposal in incomparable showcases to fully enjoy each performance in the street, in squares and in stages. Music, theatre, workshops and other additional activities take the lead during the summer in the town. For its 54th edition this year the organisers have prepared a programme that combines different genres, from classical music to circus, flamenco and comic monologues. The children also have their own programme with a rendition of the Little Prince and a concert by the Catalan band for kids, Macedonia.

One of the most popular festivals you shouldn’t omit when visiting Catalonia is the Habanera. Named after a genre of music brought back from the Caribbean by sailors from the region, these are traditional fisherman songs which are sung in the Costa Brava villages. Every first weekend in July ,the Habanera comes to life in the pretty village of Calella de Palafrugell. Fisherman sail into the picturesque bay on their boats singing sea shanties – a warming drink of cremat (rum set alight) is offered on their arrival to the shore. 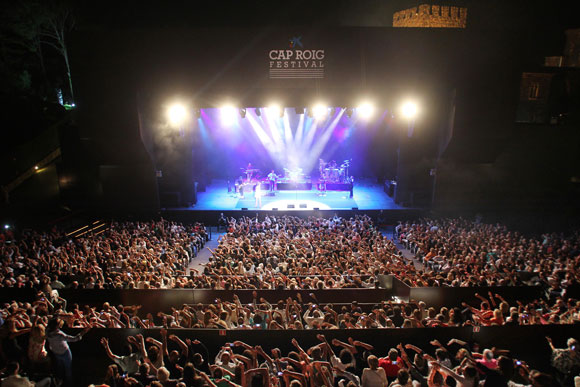 Panoramic picture of the Festival of CAP ROIG-Costa Brava

In Avant Grup we move next to music and culture.

Entities and cultural associations form a very important group in our society. The Symphonic Orchestras, Musical Groups, Theater Companys, Dance Companies, etc. stand out. All of them with mobility needs for their trips to cover their activities and activities program.

We have a modern fleet, of different capacities, that can cover these transport needs with safety and comfort. Among other entities, Avant Grup carries out the transport for the Barcelona Symphonic Orchestra and the National Orchestra of Catalonia (OBC), and for the Orquestra Simfònica del Vallès (OSV)