The ‘Nit de Sant Joan’, a festival unchanged in over 500 years

When we say the ‘Nit de Sant Joan’ (St John’s Eve) is one of the city’s oldest festivals, we’re not saying it just for the sake of it: the basic elements – lighting bonfires, throwing firecrackers and filling the public space – have remained unchanged since the Middle Ages. The first documented reference to this midsummer festival dates from the 15th century but the revetlla has had to overcome all kinds of periods and circumstances to survive so many years.

Until the 18th century the popular night-time festival, was a wild celebration with fires and fireworks, existed alongside the ceremonial one organised by the authorities during the day. Then, following the defeat of 1714, bans were introduced to stop people celebrating the revetlla, lighting bonfires and setting off firecrackers. Despite that, the people of Barcelona kept the tradition alive. By the end of the 19th century all the elements were in place that make up the festival we know today and continue to celebrate on the city’s streets and squares.

Sant Joan is the oldest popular festival in the city. While there are other celebrations, such as Christmas, that precede it, they don’t have the public character that Sant Joan does, because they are celebrated in private, rather than out on the streets. To show how, essentially, it has remained unchanged for over 500 years.

It also highlights how all the institutional attempts to change the festival, by holding organised celebrations, for example, have ended in failure. All they have succeeded in doing is to reinforce the popular element and ensure its survival. Another characteristic feature of Sant Joan night is its chaotic character, with thousands of people on the streets, big bonfires and firecrackers everywhere, although people behave responsibly and there are rarely any incidents or disturbances.

Despite repeated efforts since the 18th century, the authorities have been unable to control the festival. So, after seeing time and again how people ignored the bans, in recent years they have opted to regulate what, in their eyes, could be dangerous and get out of control. Sant Joan may be characterised by a night of unrestrained revelry but life returns to normal the following day.1 / 1

The Revetlla de Sant Joan is one of the most traditional popular festivals in the Països Catalans [Catalan countries] . The main features of these celebrations are bonfires, music, dancing and coca tarts. there are a lot of organisations in Barcelona that put on revetlla celebrations in the city’s streets and squares, with orchestras, dancing and, in some cases, bonfires .

Bonfires in city squares and on crossroads are the most spectacular and outstanding feature of the Revetlla de Sant Joan.

The San Juan day is a tradition that also extends to other cultures. Precisely in the Maghreb both Arabs and Berbers have similar performances, and bonfires are carried out in the courtyards of houses or on plots. They are in the habit of burning aromatic herbs. IIt is the survival of an ancient Mediterranean festival, which precedes Islam.

On the other hand, in Latin America, the legends say that on the night of San Juan the door opens that takes us towards magical dimensions of reality. It is the night in which the Devil walks loose and the lands are blessed by Saint John the Baptist.

In short, the Night of San Juan is a magical night full of charm, tradition and above all, fun. During those hours, we are inundated with a mystical and supernatural environment that fills magic every corner of the planet. It is the best time to meet to tell anecdotes, stories, legends and comic strips around the bonfire. Each one is free to choose the best way to celebrate the Night of San Juan, but what is clear is that for many, it is one of the best nights of the year.

“Star Tourism” is becoming increasingly popular among tourists. If you too want to sign up for this experience of gazing and interpreting the firmament, we recommend that you come to Spain, which has some of the best vantage points in the world to marvel at the sky at night. Combine your passion for astronomy with an unforgettable trip to the countryside.

Its clear skies have preserved their natural darkness owing to the lack of light pollution. Indeed, at present the Canary Islands, along with Hawaii and Chile are the homes of the observatories where the telescopes of the future are to be installed.

There is a high number of useful observation hours there. The good climate also affords a lot of nights with clear skies.

A lot of the areas from which the stars can be observed are protected natural areas, such as nature reserves, that are sure to impress visitors.

You can combine star gazing with other activities such as horse riding, cycling, hiking and nature watching or simply relaxing in the natural surroundings. 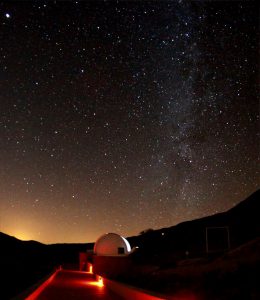 UNESCO has declared the Montsec mountain range, located in Western Catalonia, to be one of the world\u2019s six Starlight Tourist Destinations for the excellent qualities of its night sky for astronomic observation. Only six spots in the world hold this distinction and three of them is in Spain. The rest are in New Zealand, Italy and Portugal. The Starlight Foundation has plans that in the future this distinction will be held by up to 15 spots at the most internationally. The Montsec range, located just below the Pyrenees and between the towns of Balaguer and Tremp, holds one of Southern Europe. The Parc Astronòmic del Montsec, cooperating with the NASA.

The Starlight Tourist Destinations are areas that can be visited that have excellent conditions for looking at the stars, considering their protection from light pollution. They are also suitable for hosting tourist initiatives related to astronomy, as an essential element of nature. The bestowing of the certificate is understood to be a quality label and the commitment for a continuous improvement of the Starlight Destination, considering the quality and the coherence of the tourist offerings, as well as the need to preserve the quality of the night skies.

Other houses of stars.

Other experiences of astronomical tourism

In Paisatges Barcelona, ​​your trip to the stars can start in the Pujalt Observatory – an astronomy research and teaching centre located at an altitude of 750 metres. Open to the general public, it offers workshops to help visitors understand and discover the heavens and the different constellations that can be observed through a telescope, with the naked eye and with binoculars.

Very close to the Mountain of Salt, you will find another of these astronomical temples: the Castelltallat Observatory. Located at an altitude of 910 metres and in the middle of a beautiful natural setting, its 400 mm-diameter telescope will enable you to see double stars, planetary rings, open and globular clusters, nebulae and galaxies, and obtain lunar details of one kilometre.

And in Costa Barcelona, ​​the Tiana Observatory is another perfect place to bridge the gap between what you know about the earth and your knowledge of the sky. Located in Serralada de Marina Park, it will be easy for you to attend the astronomical initiation workshops that are organised there, and you will be able to learn how to orientate yourself a little better in this universe that is so complex.